Back To Normal- CrossStitch Shopping and Birds!

A big thinks to all of you who enjoyed my football posts! We are now settling back into a normal routine.  We spent 4 days in Arizona. Actually we were there during the Super Bowl.  It was a good trip and I got to go to the Attic Needlework Shop in Mesa.  The DH and his two sisters gave me time to shop till I almost dropped!   We came home to some of the coldest weather of the winter.  We have been busy keeping the bird feeders full.  We are back to the early morning Hummingbird feeder patrol.  This will be the last night to worry about that.  We are suppose to go above freezing starting tomorrow.  This post will show some of the bird's that have been visiting and my goodies from the Attic.  Tomorrow I will share some of the interesting desert photos we got and show you my Olympic stitching project. 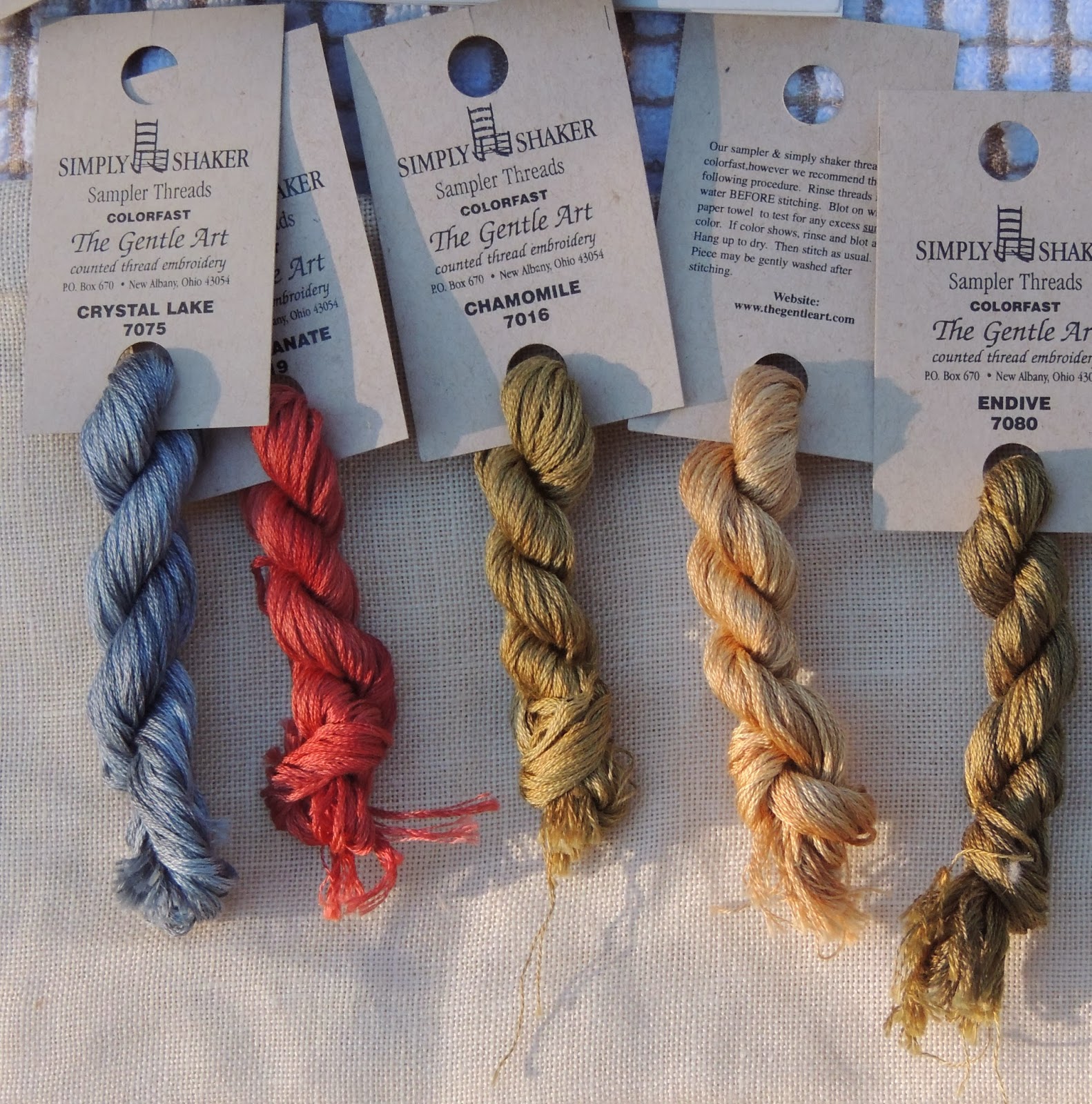 These are threads that I chose to work on the antique sampler.  I gave up on the colors a month ago but I really want to stitch the sampler so hopefully these colors will work.  While at the Attic, I mainly shopped for floss and linen.  I can get charts on line but it is hard to get the colors right. 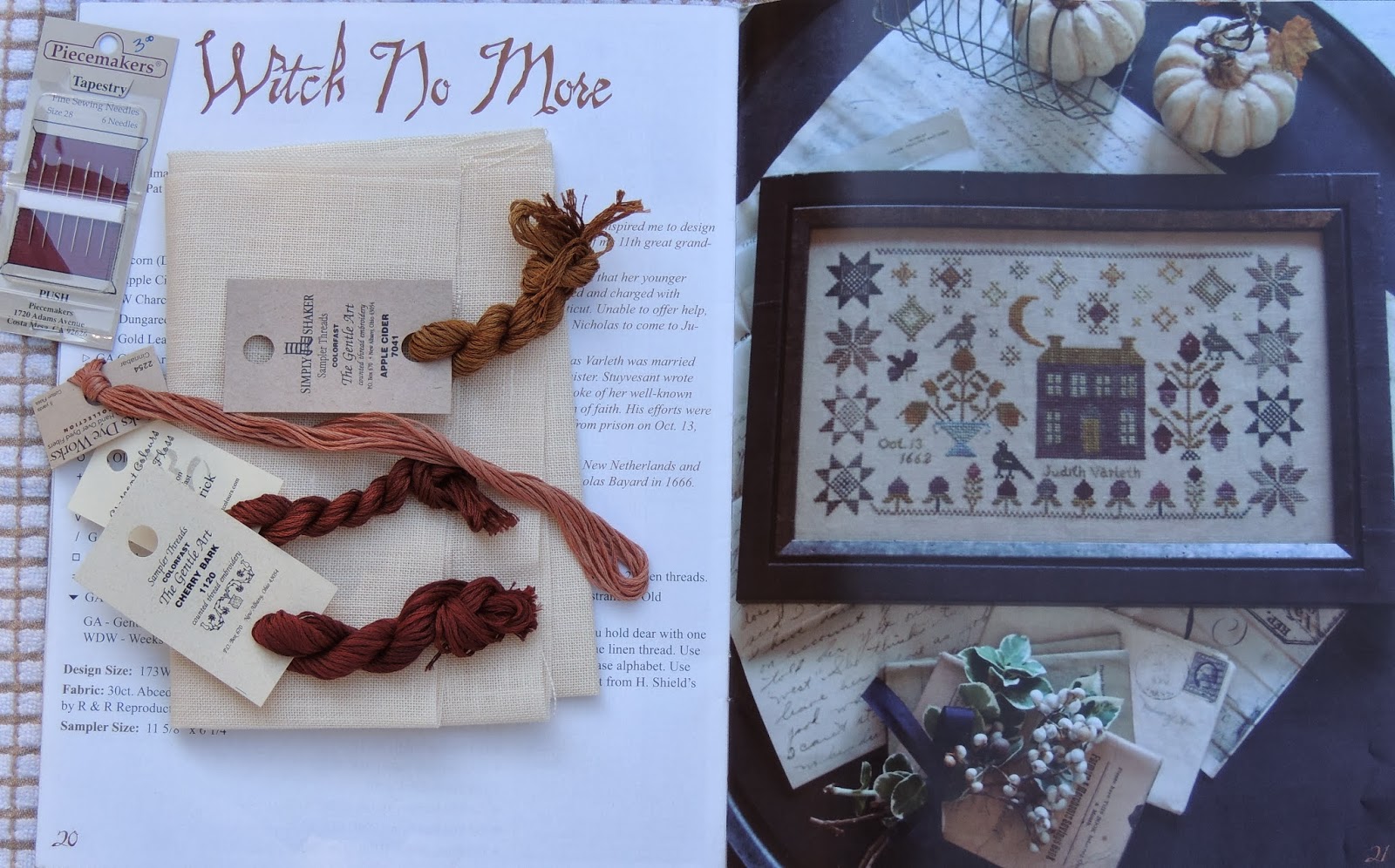 I love this chart by  BBD in the book "Sisters."  I wanted to change out the purple look so I did that, the other colors are in my stash. 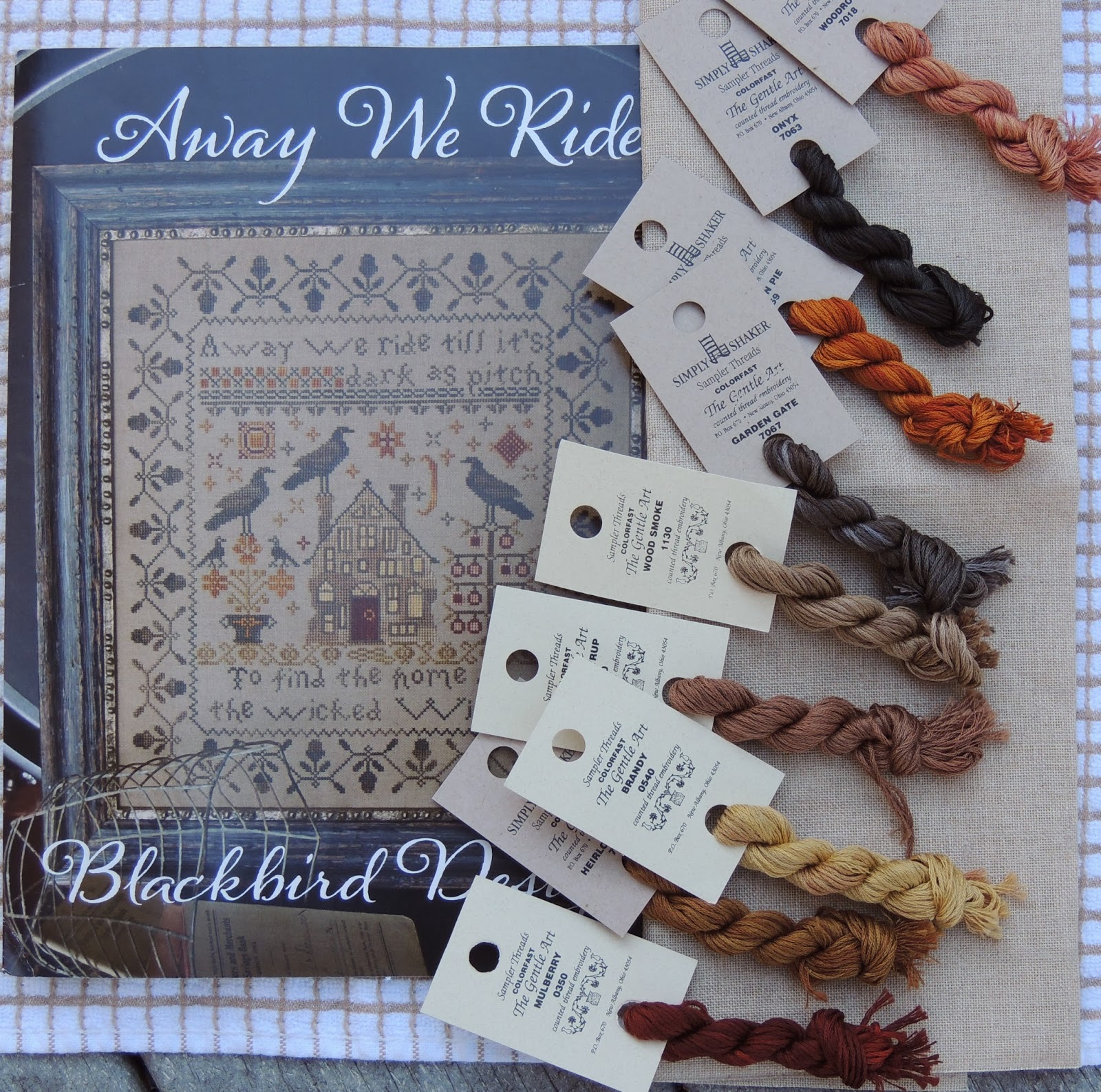 I got all I need to stitch this BBD design.  I just love it and now I can get it stitched well before next fall. 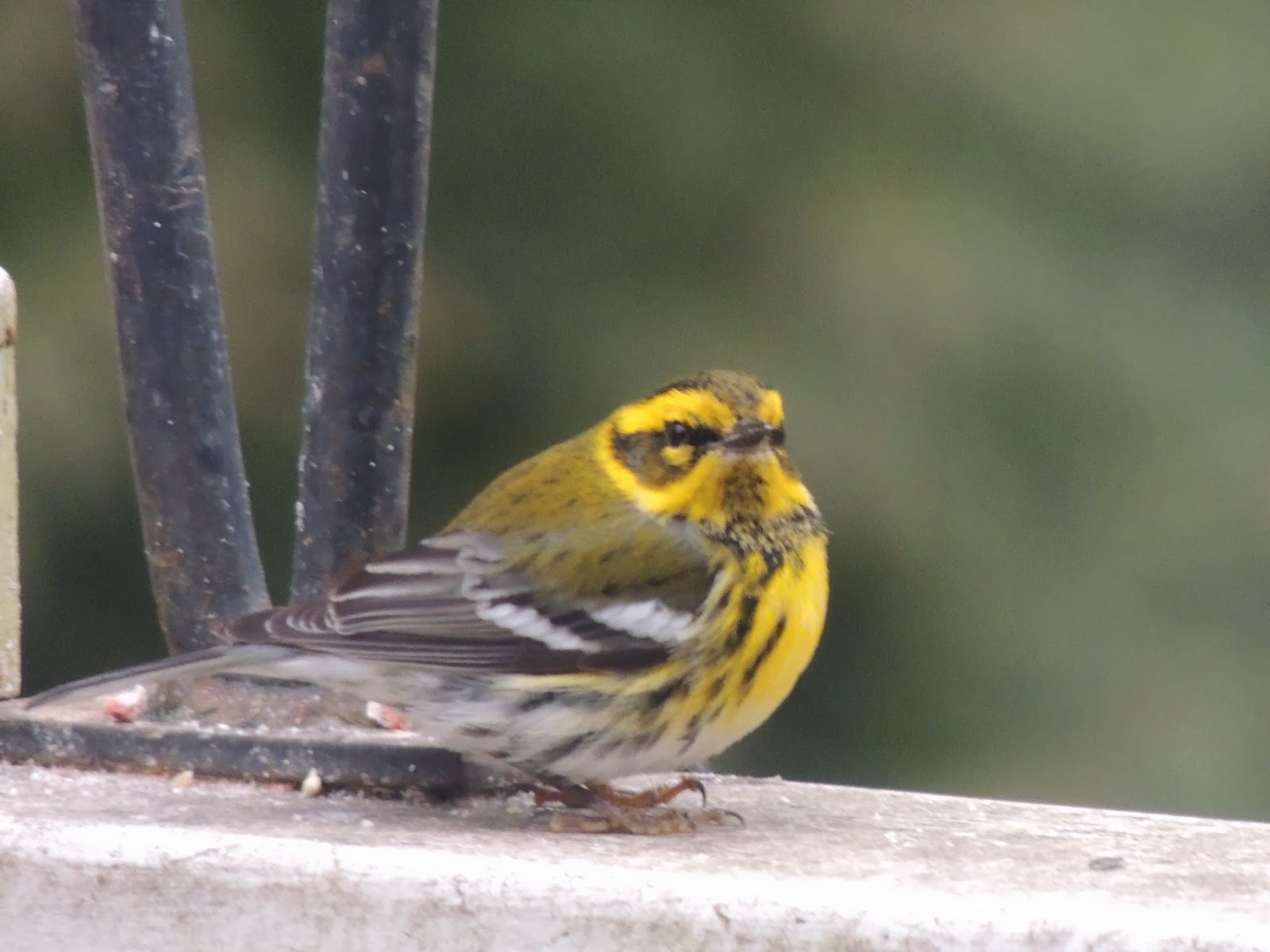 Here is the new visitor to the feeder.  We are fairly sure it is a Townsend's Warbler. It loved the suet. 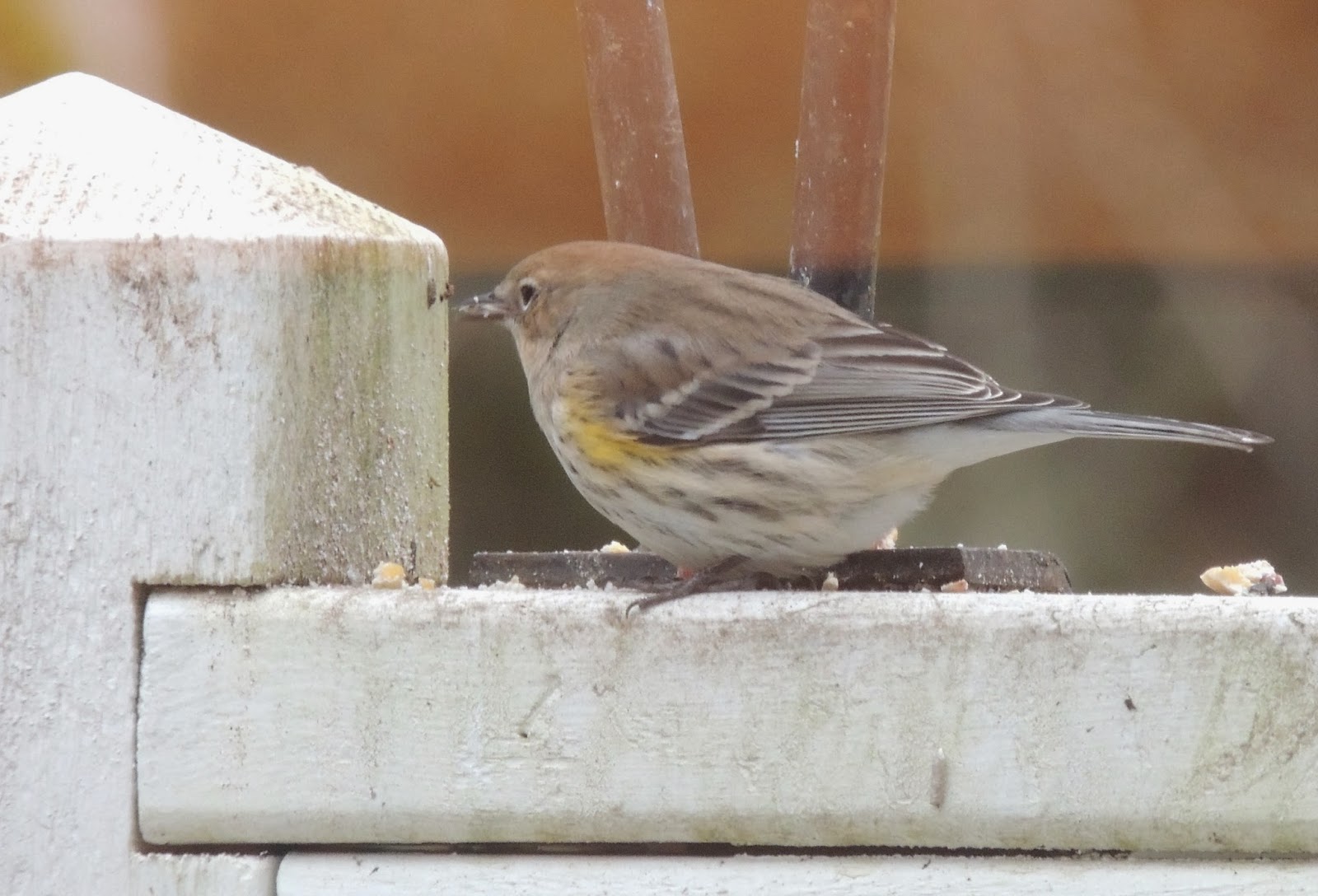 This bird has a touch of yellow under it's wing.  So far, we haven't identified it. 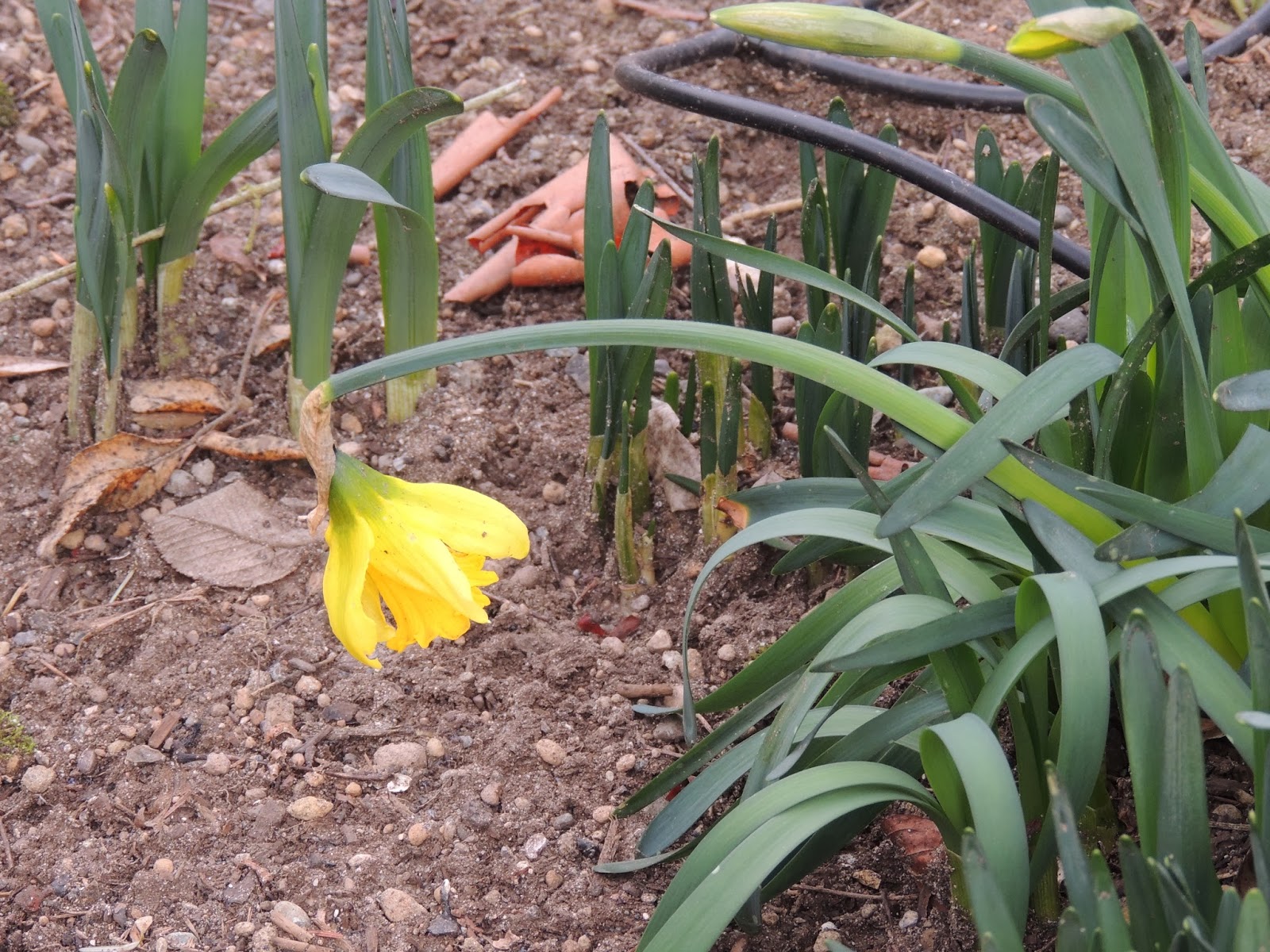 We all knew this goofy daffodil was blooming way too early!!!!!!!!!!
Have a wonderful week-end , stay warm, and thanks so much for joining me.
Posted by Barb at 10:56 AM 21 comments:

If you are tired of my football posts, feel free to stop reading now.  We have been in Arizona the last 5 days and I will have some posts from there, including The Attic needlework shop very soon.  However, we had an amazing day today in Seattle.  It was a parade for the team. I would more accurately call it an entire city celebration of the Super Bowl win.  Just a few stats: over 700,000 people were in the city today.  That number represents more people than live within the city limits of Seattle.  One third of the school children did not go to school (about 17,000), and over 500 teachers called in sick! I hope you enjoy a few pictures of the great event! 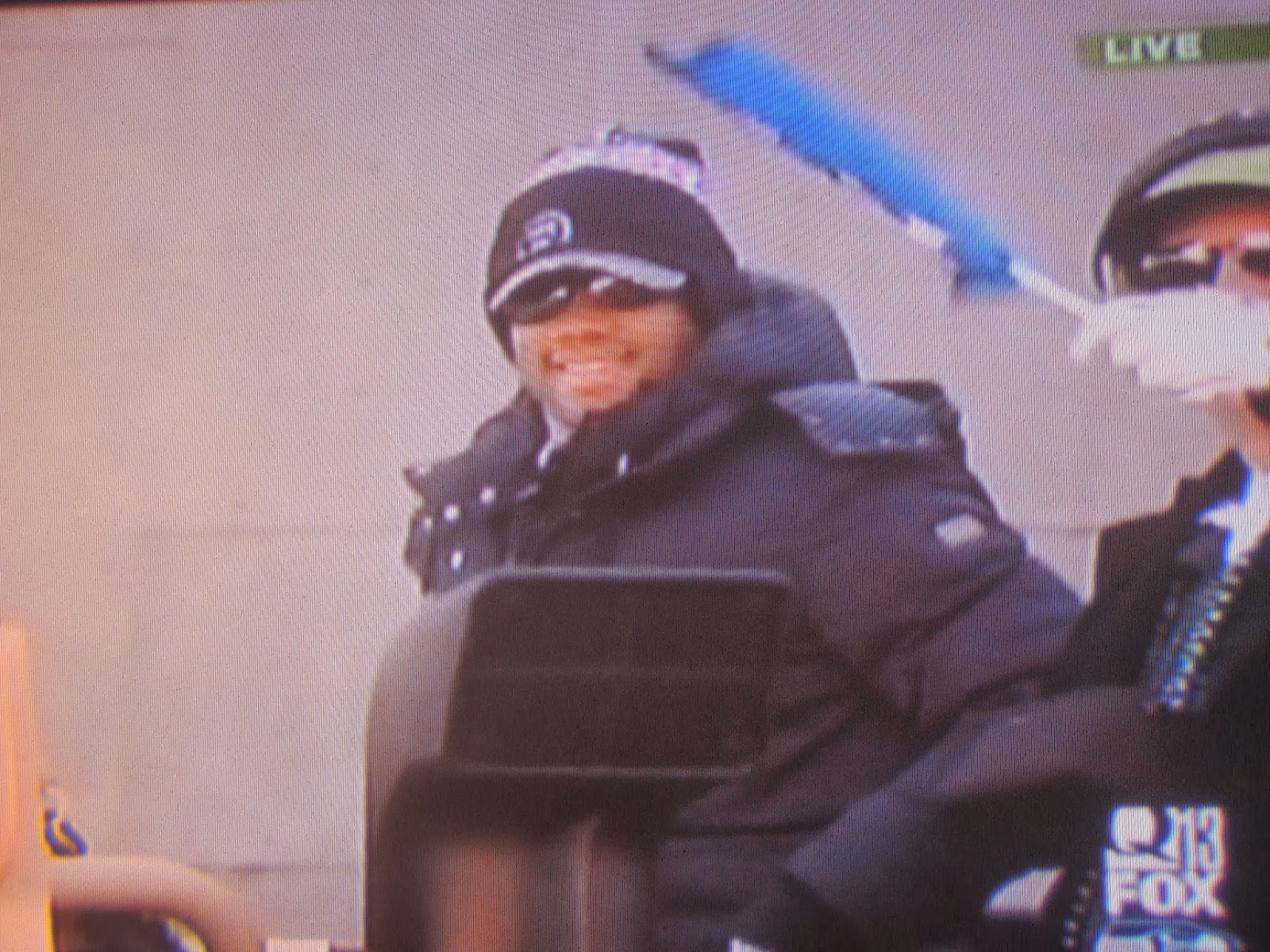 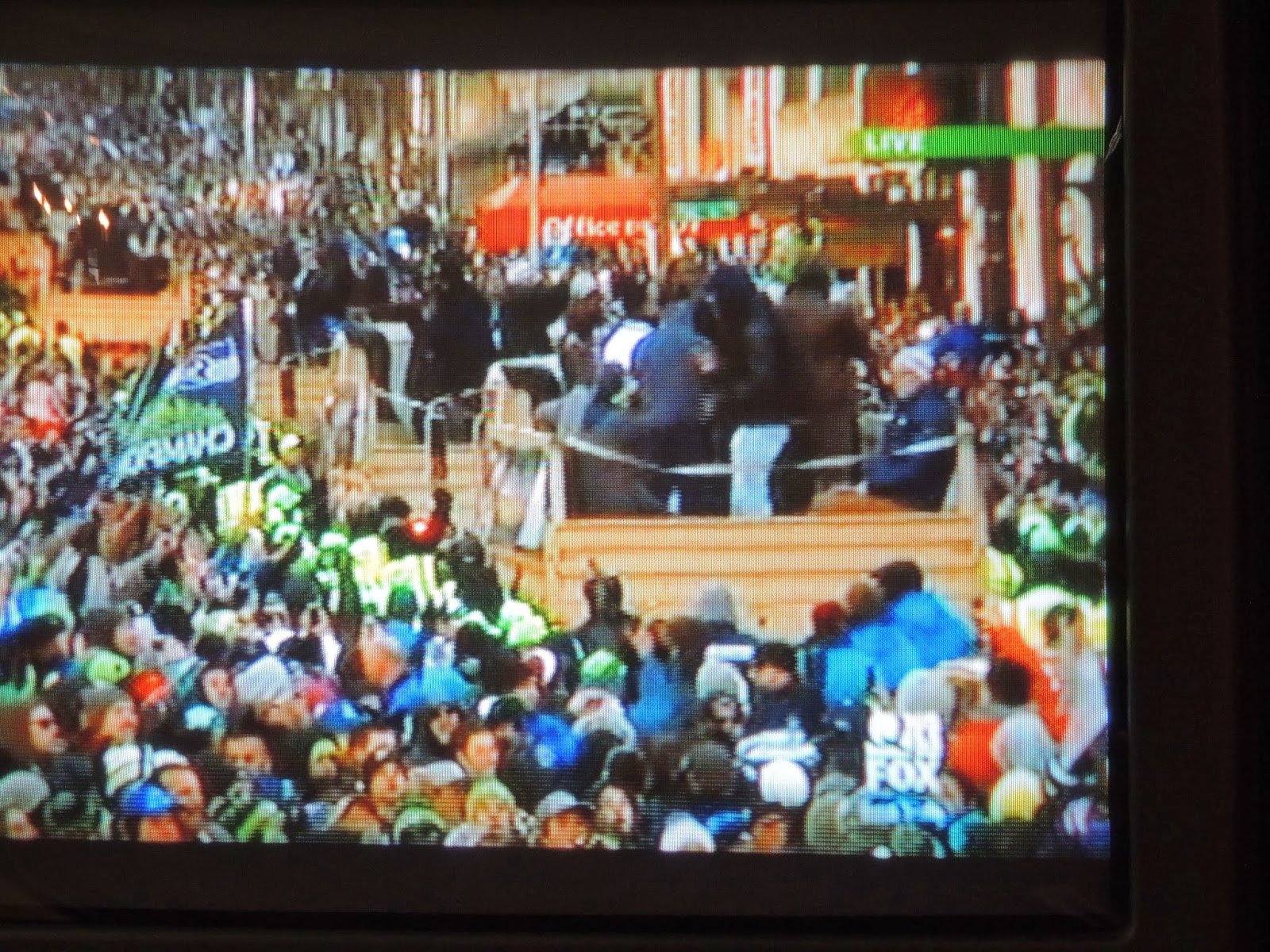 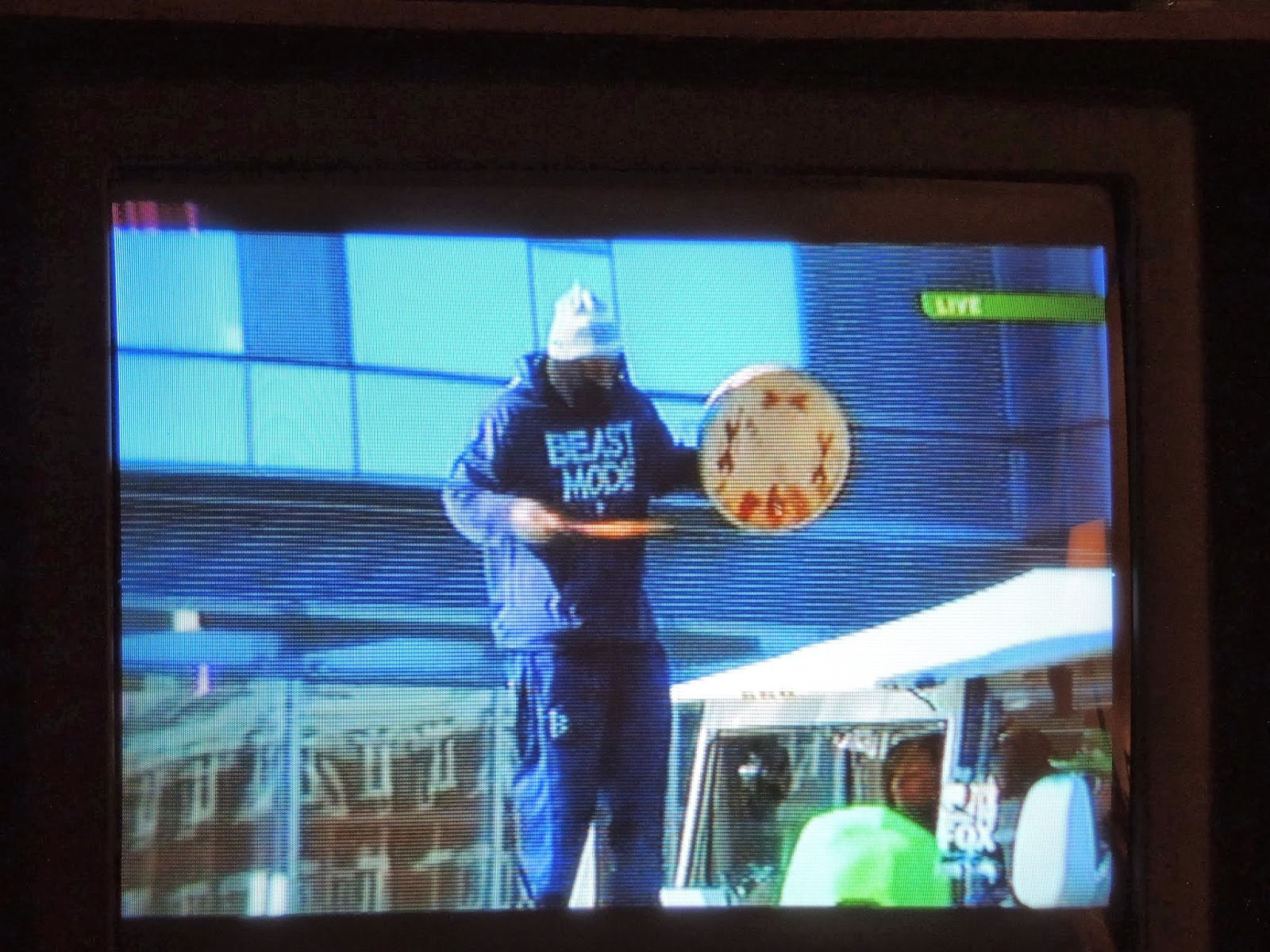 The famous running back Marshawn Lynch 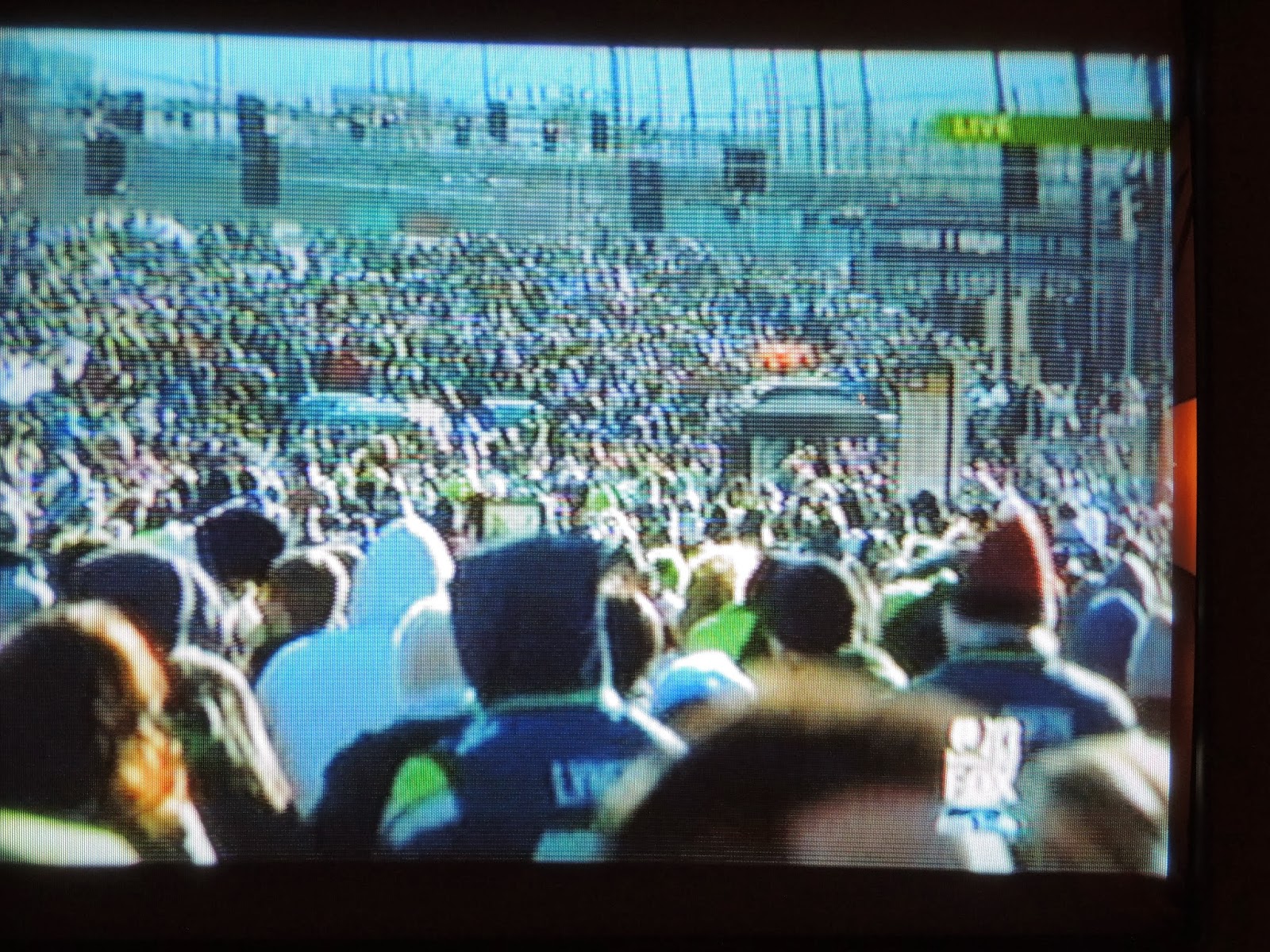 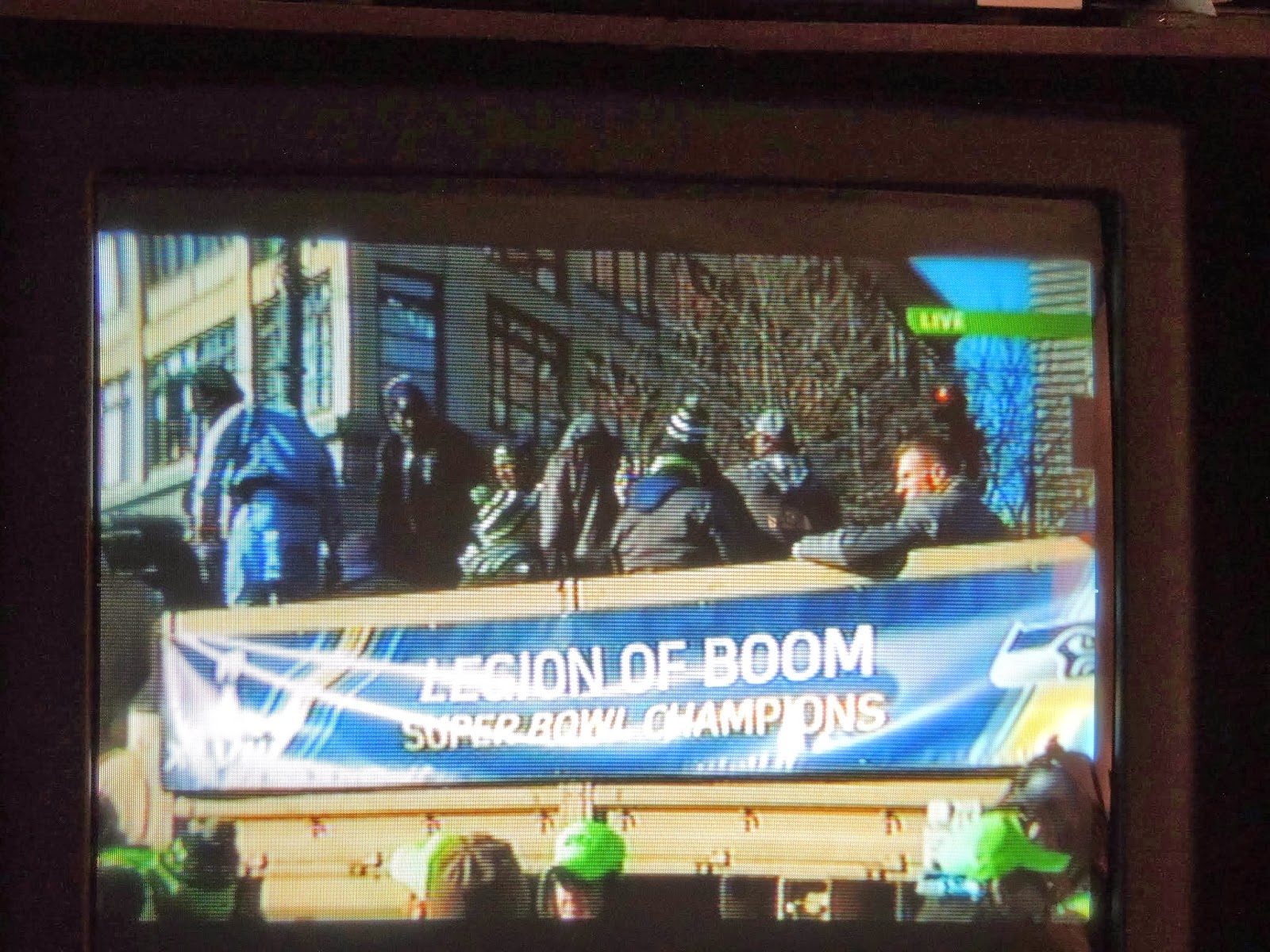 The team all rode in these open military vehicles according to their positions. 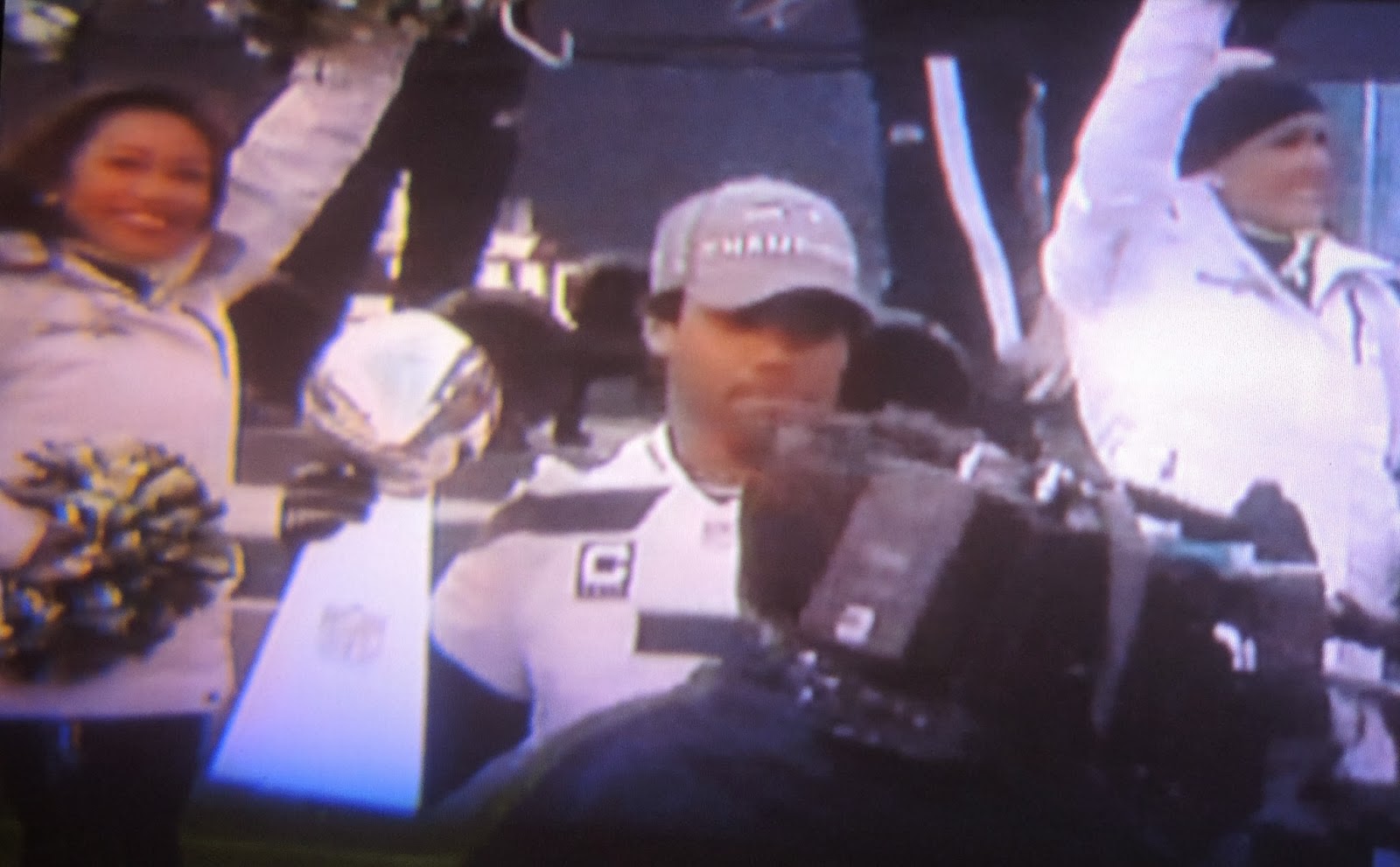 Wilson with the trophy. There was a giant sold -out rally in the stadium. The stadium was full. I don't know if that was part of the 700,000. 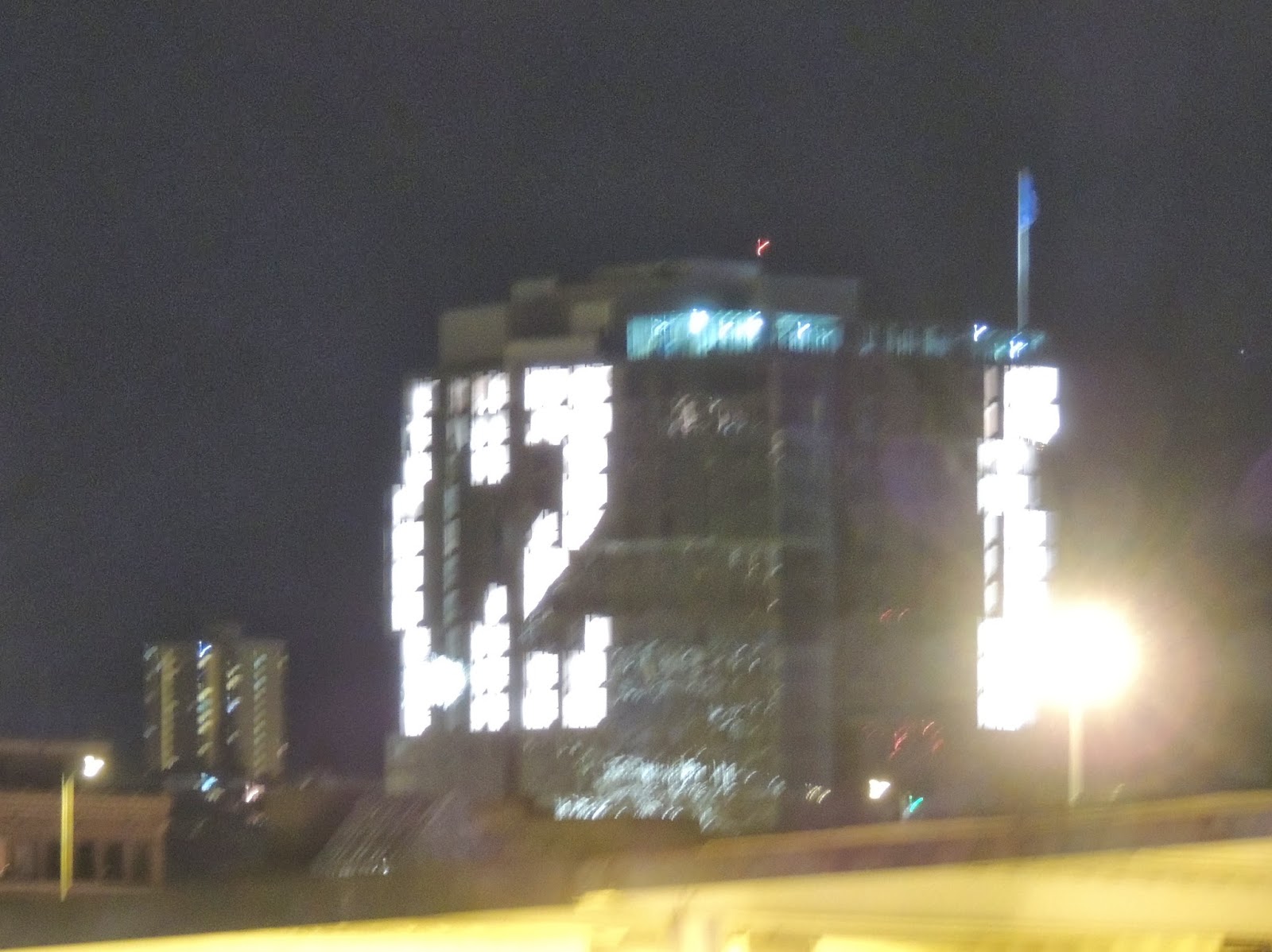 Last night on the ferry coming home from the airport we saw this tall building honoring the 12th man. 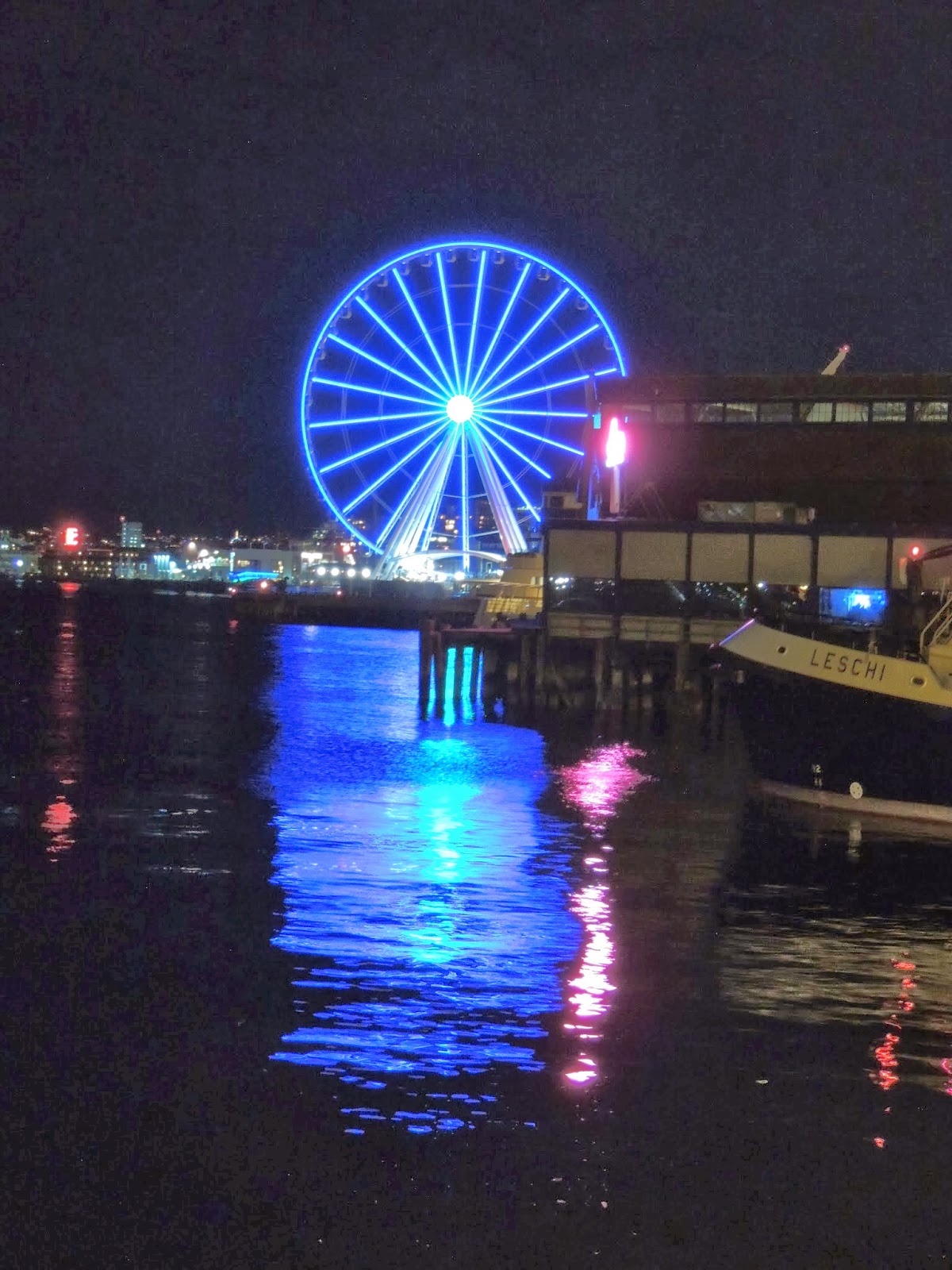 Our water-front Ferris Wheel decked out in Seahawk colors!  I think all of the region thanks the team for the fun football season! Thanks to all of you for joining me!
Posted by Barb at 8:04 PM 8 comments: